Julie in the Horror Section

Julie in the Horror Section

Hi, I'm Julie. I've never really been a big horror person - the closest I ever really came before the last few years or so was Buffy the Vampire Slayer and the like - but then I started watching Stranger Things, and attending Rural Gothic virtual conferences, and hanging out in the LibraryThing Gothic Literature group.

Now, I find myself dipping my toes further and further into the horror genre and finding things that I like. I'll probably never be a true horror buff, but I'm definitely finding subgenres and niches in horror that are to my taste and interest - enough to make tracking my reading forays into the genre here and discussing them with other fans worthwhile.

My main thread is over in Club Reads, but I'll be posting reviews of any books I read that are or are about horror here going forward, starting with The Castle of Otranto and the three books I've read this month by Jennifer McMahon. I may even go back and bring over some older horror-related reviews from 2020, as well.

I look forward to discussing the genre - or at least some subgenres of it - with all of you in this group! I found The Castle of Otranto interesting, though I did have some trouble with the formatting. Trying to figure out who's speaking in a book written before the convention of starting a new paragraph for each new speaker, or even the use of quotation marks, definitely slowed me down and made it harder to parse what was going on.

The plot was interesting, and definitely contains the elements we now associate with the Gothic genre. Interestingly, it also has a lot of the hallmarks of the classic tragedy.

From a modern standpoint, the characterization was flat and in some cases even inconsistent, but Walpole hardly seems to have been going for round, believable characterization, and at the time he wrote the book, that wasn't a fault, as far as I know.

And even with that wooden characterization, I still found myself wanting Matilda to get her happy ending, and dismayed when she was killed, which is quite a feat on Walpole's part.

The pacing felt rushed, to me, but again, stylistic differences in fiction writing between the 18th century and now account for that.

All in all, I think it's an okay story whose importance lies in its breaking with contemporary literary trends and its place as the beginning of the Gothic genre. Clery's introduction (my copy is the Oxford World Classics edition, and includes a 36 page introduction by E.J. CLery) was fascinating, and definitely enhanced my reading experience by providing the historical context necessary to get the most out of the novel itself.

This one was a book bullet from Carol420 in the Mystery and Suspense group.

I read this book in a single day - I started it at 12:38 pm over lunch, and finished it at 6:12 pm, over dinner - and I really enjoyed it. The plot and mystery kept me absorbed all the way through, to the point where I found myself resenting phone calls from friends, the need to make dinner, and the call of nature, because they interrupted my reading.

The characters were similarly well-rendered. Like real people, I didn't love or even like all of them - I had an antipathy for Martin from the moment he entered the novel, and that's nothing on how I felt about his brother - but even those for whom I felt little sympathy struck me as entirely believable.

I also really like the plot itself. The ending surprised me, and yet also felt entirely right. I closed the final page feeling exactly what I felt that I should be feeling - a mix of satisfaction, sated curiosity, and melancholy, with a twist of unease. Not to mention a certain degree of awe at McMahon's skill at weaving the story together.

I will say that certain facets of the narration - the prose - left something to be desired. Some of the writing struck me as needing a final polish. But the story was more than gripping enough that the narrative prose quickly faded to the back of my mind as I lost myself in the story anyway. This is not a book in which the beauty of the prose is the focus or the point, and the things that are the focus, this book does very well, indeed.

As a final note, I'll add that in the past I've usually avoided anything that could be classed as horror, because I don't enjoy being afraid. I haven't tried to watch Criminal Minds since I moved into my own place. I don't go on roller coasters for the same reason.

But I tried this anyway, because the story intrigued me and it came highly recommended, and I don't regret it even a little bit. I did find myself a little spooked while and directly after reading, but not nearly enough to detract from my enjoyment of the book. And, of course, it does point to McMahon's skill as a writer, that she was able to convey tone so well that it affected me so much. 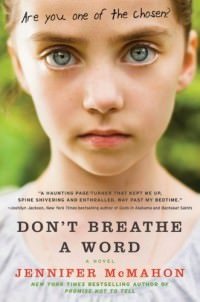 I enjoyed reading this book. As with The Winter People, the mystery/suspense plot drew me in and held my attention - so much that I finished the whole book in a single day.

(I've done that twice now, both times with suspense novels by Jennifer McMahon, and I feel like I could continue, but I'm actively deciding not to. It turns out that reading books in single days requires the setting aside of all other responsibilities and tasks, which, while fun, isn't really practical more than once in a while. Alas.)

In this book, McMahon takes on the folklore of Faerie and changelings, all with a dark, sinister twist. While I was never really afraid while reading, per se, Don't Breathe a Word definitely left me unsettled, and a little reluctant to turn out the lights for a while. In this book McMahon more than demonstrates her ability to create atmosphere and leave a lasting impression on her readers.

Don't Breathe a Word, which was published in 2011 and was McMahon's fourth novel, is concerned with some of the same themes and contains some of the same motifs, as in The Winter People, which was published three years later in 2014: the question of whether places can be evil, the idea of doors to other worlds hidden in seemingly ordinary landscapes, sibling relationships, mother-daughter relationships, motherhood, family, the ways that the past haunts the present. I'm sure there are more that I've left off and will think of as soon as I hit post.

These themes and motifs do not come across as stale for their repeated exploration, however. Each McMahon novel I have read so far has come at these questions and relationships from a different angle and through a different lens, and wrapped in an exciting suspense plot that more than keeps things interesting, besides.

It was evident while reading Don't Breathe a Word, especially having read The Winter People first, that Don't Breathe a Word was an earlier effort by an author gaining in skill with each new book. Certain elements of the writing in this book are noticeably less polished than in the later book. For instance, McMahon in 2011 was very liberal with parentheticals in her prose in a way that she had reigned in by 2014. She also outright states themes in the voices of characters a few times here, where by 2014 she had gotten significantly more subtle.

That's to be expected, of course - writers should improve the more they write, just as anyone improves in their craft as they gain experience. And while Don't Breathe a Word isn't quite as accomplished as The Winter People, it's still a great read and well worth it in its own right, not just as a comparison for McMahon's later work.

Creating and rendering complex, believable, full characters seems to be a particular strength of McMahon's from early on, and it's on full display here. The main character, Phoebe, in particular felt real right from page one.

Unlike The Winter People and The Night Sister, both of which employ multiple POV styles in alternating chapters, Don't Breathe a Word is told from a single, deep, limited-third-person point of view - that of the main character, Phoebe. I found this strategy less effective than the alternating POV - as apparently, did McMahon, given that she seems to have abandoned it in later books.

I did have a problem with faux-cursive font in which the book excerpts included throughout the book are rendered. The use of this font, clearly meant to mimic handwriting, is an unnecessary affectation that comes across as silly, artificial, and too try-hard. It' also an ableist barrier to entry for readers with learning disorders and disabilities such as dyslexia or even bad eyesight. I found the font difficult to parse myself, and I have no such organic handicap hindering me - I can't imagine how difficult and obnoxious it must be to readers who do have disabilities of that type.

All in all, despite some technical flaws that kept it from a full four stars, Don't Breathe a Word is a gripping suspense novel that looks at interesting themes and asks interesting questions, and I'd recommend it to anyone who enjoys suspense, supernatural or horror mystery, darker looks at faerie folklore, or McMahon's other books.

Thanks for the posts/recommendations; the McMahon novels look interesting. I've read a lot of horror and lately have been seeking things listed under any combination of the terms "gothic," "literary," "mystery," etc., and I'm surprised her work didn't turn up in those searches as it seems to fit right in.

For those who don't read much horror but are considering trying it out, I often recommend two from Peter Straub: Shadowland and Ghost Story. Straub's horror isn't the kind in which blood drips from every page (so to speak); he's a fine writer whose work is a bit more than the genre label might suggest.

In general, no one considering horror needs a recommendation to read Stephen King - by virtue of being part of the English-speaking world, you already know who he is and likely have already decided to, nor not to, try him out - but for those already considering trying him, I suggest starting with Salem's Lot or The Shining, because they are relatively short, they make sense (he occasionally goes off the rails, but not in these), and they are good (by which I mean: if you don't like these, you won't like King). Having said that, some of King's best writing isn't horror at all, and the best of his non-horror work may be the collection Different Seasons, which consists of four novellas, two of which are the basis for popular movies (Stand By Me and The Shawshank Redemption) many people don't associate with King.

>5 St._Troy: McMahon's books are billed as suspense, actually. Though I did see them on the horror shelf at my local indie bookstore today.

I've read Stephen King's On Writing, and really loved it. I've never read any of his horror stuff, but I'm definitely aware of it. Thanks for the recommendation!