I've been working on a bird quilt. The center will be a cross stitched kingfisher, Surrounding that will be English Paper piecing in Grandmothers flower garden pattern, with the center hexagon of each rosette one of my husband's bird photos. It is really coming along nicely.

I finally got around to doing the back stitch on the kingfisher. 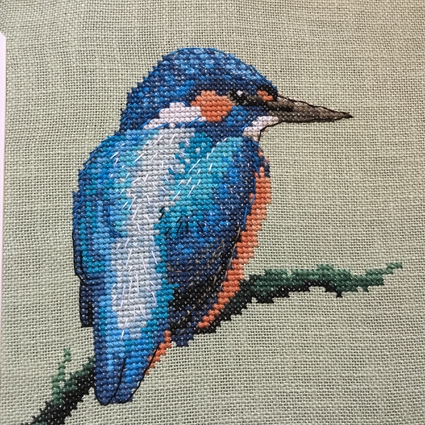 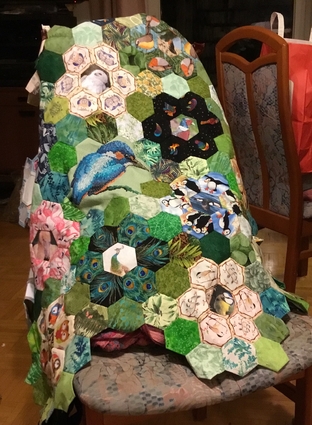 We have transfered 30 of my husband's bird photographs onto cloth and searched to find more or less fitting fabrics to surround them. Now most of the rosettes have been sewn, and they are being sewn together with green hexagons between. There will be a final ring of bird hexagons, then the final row of green will be half folded over to the back to give straight edges.

I have booked workshop space tomorrow in two weeks to baste the quilt. That gives me a fairly large table and two extra hands, however neither of us has ever basted a quilt before. I have the batting and the backing fabric. I have to piece the backing still, but am waiting to see final dimensions of the top.

I still think I can be ready to baste on Wednesday, but I am doing almost no reading. Sewing hexes together has taken over my life.

Hexes all sewn together!

Bit of a crisis yesterday as I realized that the cloth I had for the back was not enough. Then the store was out, so that wasn't going to work. I found an alternative in another store. May actually be better. I bought lots. 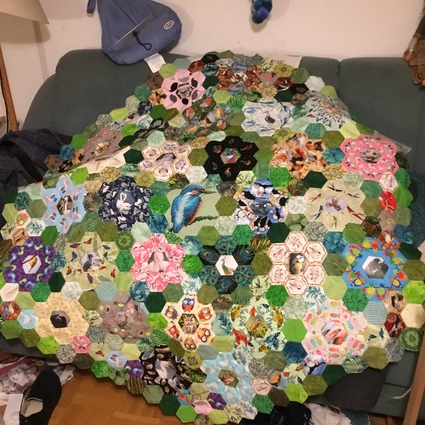 Everything ready now to baste on Wednesday.

Started on the quilting. It seems to be going well.

I am coming along well with the quilting, and decided to do a bit of the edge where the quilting had been done. 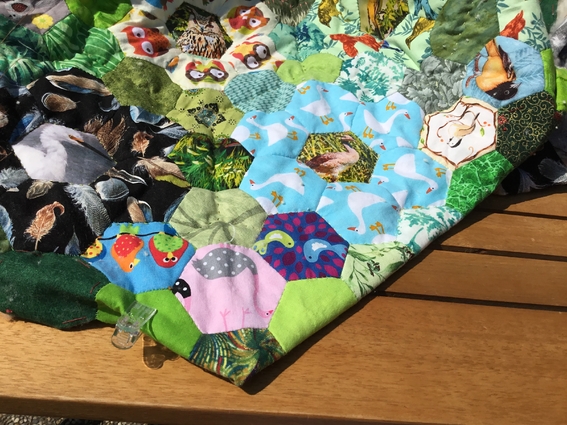 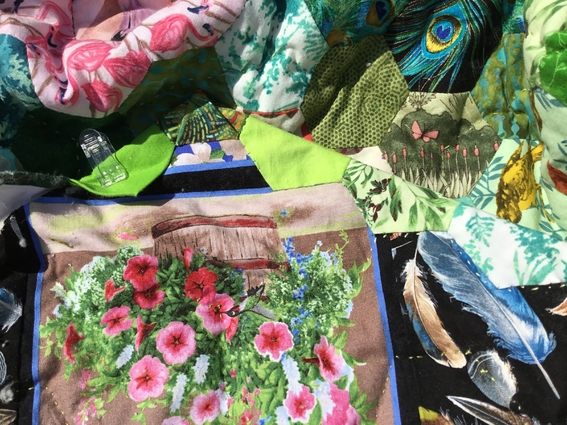 There will be another row of quilting around the edge, catching the points front and back.

I finished the quilt last week - Wednesday, I think. Sorry, we were on a short trip and I had a monstrous cold, and the hotel's wifi was very unreliable.

I want to take several pictures of the finished quilt to document it. That means first finding a place large enough to lay it out flat.

I really enjoyed the way it became a real quilt as I worked on the finishing steps.

>12 MarthaJeanne: I'm looking forward to your pictures of the finished quilt. I've been quietly following along for a while, and expect it to be lovely. :-}

I've taken pictures, but rather than put them all up here, I have asked my husband to put them in a folder on his website. As soon as he has done that I will post a link.

Near the top of the quilt I have two rosettes next to each other. The fabric hexagons all come from the same material, two different birds for each rosette (I had four of each motif in the piece I bought.) One of the photos is an American robin. The other is (one I took of) a European robin. I coloured the eggs in the nest around the American robin blue.

The ruler in one of the pictures is in centimeters.

It's really lovely. The work that goes into quilts is enough, and then you did the embroidery as well. Interesting that it's not a square or rectangle shape. I hadn't expected it to be six-sided, but that decision lends itself well to the pattern of the (I want to call them squares, even though they are not) pieces.

The Peacock may be my personal favorite.

The hexagon shape is a natural result of adding rosettes of hexagons out from the center. I'm somewhat surprised that I ended up with points top and bottom with verticals on the sides. But the third ring is not complete. It has 12 rosettes like the second ring. Another six would have switched the hexagon around again. But it was quite big enough, and I had really bought all the suitable bird prints to be found in Vienna.

I pieced the back by machine. Two long straight seams are very easy by machine, but everything else is hand done. We were at a birders fair as I started the quilting, and I was working on it during breaks. One woman actually told me I was doing it wrong, because patchwork should be done by machine.

There are 30 rosettes, and I have a personal relationship with most of them.

The 'peacock' is actually a peahen. I was at the point of insisting that we go take a peacock picture at the zoo when Jerry came up with her. I had bought the peacock feather prints already.

Another bird I insisted on was the vulture. I feel good about the decision to surround the vulture with elephants. I tend to associate vultures with my childhood in India, so they go together. Note that the elephants have birds on their backs. I was rather desperate for bird prints.

(A reasonable person would collect prints over time before starting something like this. I just started and worked hard running from store to store to get what I needed.)

The fish rosette was deliberate, and fits the photo. But the Eagle surrounded by chicks from an Easter print was desperation. Even online I only found an eagle print or two, and they were very US patriotic.

The fancy rooster photo was taken at Schlosshof where they have various special breeds of farmyard animals. I surrounded him with hens. The rooster from that print is in the border.

I had the puffin print from a long ago trip to Maine. The border also has birds from my stash. Mostly from African scenes. I love the crocodile with two birds climbing on him. There's also a Christmas cardinal.

The other photo that I took is the pelican. That's the one print I ordered online.

Several rosettes are just trying to match a random bird print to a photo to try and make a vague connection. The falcon in flight surrounded by a graphic birds in flight print. Right next to that is a starling surrounded by rather strange colourful birds on the wire. My husband says that a whole group on the wire with spotted bellies - must be starlings, even if they are bright colours.

The reason there are two different owls is because I found so many owl prints.

The flamingo is one of Jerry's favourite pictures, but for the quilt he agreed to crop out the bottom of the beak. It has a big drip forming. I don't find that very attractive.

The grinning bird surrounded by ostriches is actually a Nandu (Rhea) - and lives at a farm that has both those birds, white turkeys, ... We stop now and again for ostrich steaks and took the tour recently.

English Paper Piecing works up differently from 'normal' piecework. You don't really have 'squares' as such. I found that it took a lot of concentration to get each rosette fitted in correctly. I was also working hard to keep the green paths between them somewhat balanced. It used a LOT of green hexagons, from well over a dozen different prints. You also can't quilt right 'in the ditch' because there isn't any cloth there - just the seam. I've decided that I enjoy the work. very meditative when it goes well, which machine piecing isn't for me.

The embroidery wasn't 'as well'. The design started from the central embroidery. The quilt part grew and got fancier as I worked on it.

I'm actually also working on a butterfly/dragonfly quilt that started with a series in a crossstitch magazine. Mine will be much bigger than theirs, and I need to get back to stitching so that I can get piecing the squares together. Stitched squares will alternate with prints, and the outer border will include various other needlework. But now and again it's good to actually finish something.