Anyone have a favorite of his? I'm interested in getting started reading his books. Thanks!

I liked The Teyve Stories and Others -the touchstones are not working.

(cross-posted from my Club Read thread) 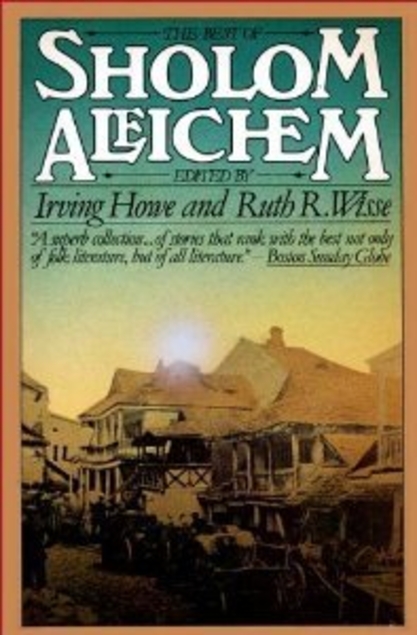 This anthology was pure reading pleasure. To anyone who, like me, has heard of Sholom Aleichem, and is probably familiar with his character Tevye the Dairyman from the successful 'Fiddler on the Roof' musical play/film - an adaptation of some of the 'Tevye's Daughters' stories, but who has not previously read his work; if you enjoyed that character - and want a bit more - then as far as I can tell you're in for a treat with much of what he wrote. 'The Best of' includes twenty-two stories from his work - many of which are newly translated here with previously omitted material, as well as three appearing in English for the first time.

These hugely enjoyable stories while on the one hand entertaining, are on the other also a moving illumination of a culture now vanished of course, that of the shtetl - the small Jewish semi-rural communities of eastern Europe that were scattered like salt and pepper throughout the Russian Empire's 'Pale of Settlement' and the fringes of the Austro-Hungarian Empire. That small planet of a Yiddish speaking people, the 'old country', their villages and inns, their prayer-houses and bath-houses, the chicken yards, tailors' workshops and market places where they worked, as we know had pretty much all gone by the mid-20th century - ending predominantly in either mass emigration or mass extermination. Reading these stories will momentarily recreate that lost world.

As the editors suggest in their epistolary introduction (which I found extremely worthwhile reading having finished the stories first) - If you follow the line of the plot, {referring to the Tevye stories} it traces nothing less than the breakup of an entire culture. ... Tevye, who is actually defenceless against the barrage of challenges and attacks that lay him low, should have been a tragic victim. Instead, balancing his losses on the sharp edge of his tongue, he maintains the precarious posture of a comic hero.

Sholom Aleichem - the pen name of Solomon Nahumovitch Rabinovitch (1859-1916)- was a master humourist. A master of character, of setting, of timing, of leaving you wanting more - everything you would want from a great teller of tales. This collection - clearly a labour of love for the academic editors Ruth R. Wisse and Irving Howe - is not just a selection of the Tevye stories - not that I'd be complaining - but effectively is a retrospective representation of his different story themes and many memorable characters that he created. There's Shimon-Eli a haunted tailor, Mottel the cantor's son, Benjamin Lastetchke (the richest man in Kasrilevke. There is no end to his greatness!) and the Krushniker delegation to name a few. The fictional shtetl of Kasrilveke itself is perhaps his greatest creation of all. He takes you there with just a few strokes of his pen. The honest hard-working mensch, the idle beggar, the gossip, the unfortunate entrepreneur, the fool, the con-artist, the sage, the spirit of beloved grandparents long gone - they're all here.

But don't read Sholom Aleichem if a little chauvinism here and there offends. Tevye the milkman has a wonderfully mischievous line in matrimonial put-downs:

"What do you want me to say?" she asks. "I know that Mencachem-Mendel isn't a nobody who would want to swindle you. He doesn't come from a family of nobodies. He has a very respectable father, and as for his grandfather, he was a real jewel. All of his life, even after he became blind, he studied the Torah. And Grandmother Tzeitl, may she rest in peace, was no ordinary woman either."

"A fitting parable." I said. "It's like bringing Chanukah candles to a Purim feast. We talk about investments and she drags in her Grandmother Tzeitl who used to bake honeycake, and her grandfather who died of drink. That's a woman for you. No wonder King Solomon traveled the world over and didn't find a female with an ounce of brains in her head."

One of the stories translated here for the first time - "The Krushniker Delegation" - highlighted a different aspect of his work that particularly interested the history buff in me. The editors write that being written toward the end of his life, it deals with the experiences of east European Jews caught in the First World War between Germans and Poles. Elements of the traditional Sholom Aleichem are still there, but the tone and substance have changed - ...as if the great humourist is giving way before the blows of modern history. There is a dark edge to his writing that surfaces and has a knack of almost catching the reader off-guard.

From the story 'Once There Were Four' - a frame tale (with the author as one of the eponymous characters along with three of the greatest Jewish writers of the age) in which four "anecdotes" on the subject of forgetting reveal how even those great writers are revealed as ordinary, anxious Jews, faltering and trembling in ordinary, if not humiliating circumstances:

There are moments you want to forget, to blot out from memory - but it is impossible. We forget what should be remembered and remember what should be forgotten. That, in a nutshell, is the moral of the story. Now it's someone else's turn.

2016 is the 100th anniversary of Sholem Aleichem's death and yarzheit

I read most of Motl the Cantor's son for a class last year. Didn't get as far as their trip to America but
enjoyed what I read. This past summer I heard a very interesting lecture on Sholom Aleichem in Tel
Aviv. Do people know his archives are in Tel Aviv? I wanted to visit but they were closed for the summer.
It was Sholom Aleichem who gave the name to himself Mendele and Peretz the three grandfathers of
Yiddish literature-an issue which contemporary feminists have problems with.