Discussion: The Lost Dog, by Michelle de Kretser (NO SPOILERS)

Discussion: The Lost Dog, by Michelle de Kretser (NO SPOILERS)

Just a place to jot notes and discuss (without spoilers!) anything about The Lost Dog.

I seem to be the only one reading it this Orange Month, hopefully others will read it another time, as it is quite a wonderful book.

The characters are very complex, the language is lush, the plot and background stories are being slowly revealed. What's not to like? (Well, if the lost dog comes a cropper, I might be seriously peeved. At the moment, its still missing. And nameless, but I don't think we're going to get a name.)

I particularly like how de Kretser has captured Australia, both urban and the bush. She's set it in (and around) Melbourne (which remains nameless, but I recognised some of the areas she describes), and I keep on recognising all sorts of bits of the area.

This morning I finished a passage about modern greed and spending. I want to copy it all out but 1) I'm at work; and 2) it went for several pages. :)

Hmm, sounds like an intriguing book for Orange July.

Hi wookie. I'm not reading this one now, but I did read it a while back. I seem to remember liking it, but with reservations. I'll have to go back to my journal and see what I wrote about it, then I might be able to make some sense when we talk about it!

I have this on my tbr pile but won't be reading it for a while. I didn't realise it was an Orange book.

Finished it, and wrote my review.

I did like it, although it was definitely too hot today to read a dense literary work. Luckily I was on the final pages (and an airconditioned bus!) so it wasn't too difficult. (The last pages of any book fly by for me.)

Judy, my reservations would be the confusions: too much jumping around in time, too much ambiguous language. It did enhance the book (I felt that confusion was one of its underlying ideas), but also, well, confused me at times. :)

I hope some others give it a chance, another Orange month!

I read this one a couple of years ago, and remember few specifics now, although your review helped to bring some of it back (nicely done!). I do remember feeling a little as though I'd missed some of the significance of the story (I was pretty wrapped up in the fate of the dog, so I might have read a little too quickly to properly appreciate some of the crafting), but I also felt sure that I wanted to read more of this writer's work. It was definitely a worthwhile read for me.

Just putting a few images in here (they've been on my thread, but they really should go somewhere more generic). There's quite a bit of art referenced in the book, these two in particular: 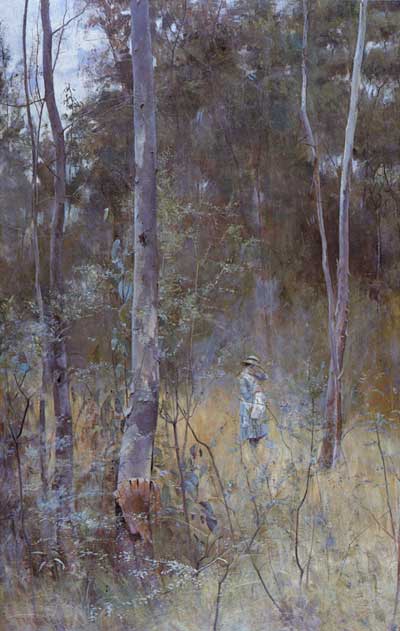 And the Skipping Girl:

She was a neon sign, advertising malt vinegar, and apparently quite iconic (on the Melbourne skyline).