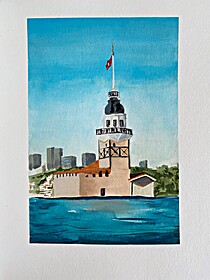 Sobre mimI spent years working in bookstores. I have a "to be read" list that is ridiculously long, added to substantially by deciding to try to get through the 1001 Books list. (That "to be read" list has become so long that I no longer keep a list, in fact.) I'd read more, but I have too many other things I want to do as well!

One quirk about my reading: somewhere along about 2012/2013, I decided not to read reviews for books I haven't read. I also don't read the backs of books or other summaries. I practice a sort of "book roulette" for what I read that's not on a list - I go by author, or how many times I've seen the book title come up, or *gasp* the cover.

Things I enjoy doing when I'm not reading - drawing, taking photographs, knitting, cross-stitching, crocheting, and watching tennis, soccer, and I used to be a football fan but with all the health-related issues in the sport I had to give up watching it.

You can find my art and photography in a few places - Zazzle (http://zazzle.com/UrsulaRodgersArt) has a selection of postcards, and my photography and art are also on Redbubble (http://redbubble.com/people/ursularodgers/portfolio).

Sobre a minha bibliotecaI'm kind of over keeping a lot of books - I have invested a fair amount of time in trying to read and get rid of books on my shelves. Now I'm a read-and-dispose-of type of reader. Moving a lot helps with the motivation.

Unless it's specifically tagged with "unread" or "unfinished," I've read it.