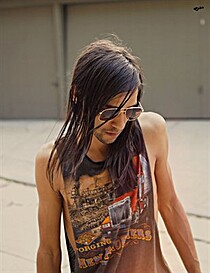 Sobre mimSteven Thornton, born in Oklahoma, of Native American descent. Is a romantic, a creative thinker, certainly a dreamer, probably a visionary, and perhaps both brilliant and mad at the same time. He grew up on a farm, no stranger to hard work – spending years on a road grater with his Grandfather, learning to build roads and spread gravel. His summers were composed of driving dump trucks, feeding cattle, working a garden, and enjoying the occasional fishing hole. He attended Southwest Baptist University, majoring in Business Administration (but dropped out).
Leaving the rural Midwest to catch a dream in Los Angeles, he became a successful fashion model for leading companies including DKNY, doing shows in Milan, print work and billboards in Sweden, working for large international companies like TMobile and Geico. A chance meeting with a medium changed his life, alerting him to possibilities he had otherwise never considered. She asserted that his grandmother was one of his guardian angels, and he credits her for changing his life. This is his first novel debut, he is now working on his third novel, “Samantha,” a coming of age novel.
The book DIMENSIA explores spirituality, religion, physics, meta-physics, and scientific theories. Which reveals his keen interest and belief in parallel dimensions. (Which of course allow for more opportunities for love, happiness, success, growth, and light!)
He attempts to explain, explore, and excite his potential audience with the possibility of the unknown.
Explaining the tone of his book, he uses words like: “dramatic, explosive, intriguing, at times playful, struggling, unwilling to accept reality.” In this dimension, he “faces the darkness and embraces the light,” and attempts to define the existence of things one could only fathom. I know this sounds crazy, but he's crazy enough to try to change the world!