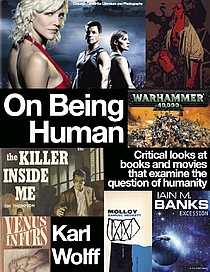 I review fiction and non-fiction books for The New York Journal of Books (http://www.nyjournalofbooks.com/) and my own blog "The Driftless Area Review" (http://driftlessareareview.com/). Follow me on Twitter (links below).

To publishers and authors: If you are interested in having me review your book, send a query letter to driftlessareareview @ hotmail . com. I will send you information on where to address the review copy. I will read pretty much anything put in front of me.

Reviewing books via Early Reviewers, the Joe Bob Briggs website, the New York Journal of Books, and CCLaP has exposed me to hidden gems amidst the dross and slag. I've also found rare and forgotten treats on the shelves of used bookstores and places like Goodwill and Savers.

A quick glance of my Library and my reviews should give you a good picture of my tastes, preferences, and interests.

Sobre a minha biblioteca"The library represents, maybe with the prison, the last of the uncontested moral universes. The moral goodness of the library is intimately connected to the conceptual value of the book" -- "CONTENT" by Rem Koolhaas

"There is no such thing as a moral or an immoral book. Books are well written, or badly written." -- "The Picture of Dorian Gray" by Oscar Wilde

"But I've developed a great reputation for wisdom by ordering more books than I ever have time to read, and reading more books, by far, than I learned anything useful from, except, of course, that some very tedious gentlemen have written books. ... Thank God for them all, and for that strange interval, which was most of my life, when I read out of loneliness, and when bad company was better than no company. You can love a bad book for its haplessness or pomposity or gall, if you have the starveling appetite for things human, which I hope you will never have." -- "Gilead" by Marilynne Robinson.

"He is a bad novelist and a fool. The combination usually makes for great popularity in the US." -- Alexander Solzhenitsyn according to Gore Vidal (1980)

"It is all harmony of artifices, of deliberate contradictions. Let us try to note some of these. Realism and idealism are mingled. Along with description that takes extravagant pleasure in the most dismal details of physical reality there is, at the same time, refined expression of ideas and beliefs that exceed the immediate impression made on us by bodies -- There is a union between of the most profound sensuality with Christian asceticism." -- "Les Contemporains ("Baudelaire")" by Jules Lamaitre

My library is an amalgamation of a lifetime. It's an example of wide-ranging, generalist taste, everything from fiction to non-fiction, pop to High Art and everything in between.

Lendo atualmentePriestess of Morphine: The Lost Writings of Marie-Madeleine in the Time of Nazis de Marie Madeleine