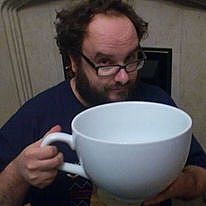 Ever since I can remember I've been fascinated by books. I've always read and been a prolific reader but it was the books as much as anything else I adored. I regularly went to school laden with at least three or four reading books (in case I finished one and to give me a range of choices for my next book in case one of the others turned out to be a bit of a duffer) and most pictures of me before I hit my teens have me with a book *somewhere* on my person.

And then came the awkward teenage years. Which were even more awkward for me considering I decided that rather than try and catch up with the modern world my bullies and assailants seemed to live in (I didn't listen to a note of music that wasn't jazz or classical until I was seventeen to further prove this point) I would immerse myself into the past even more - and specifically seemed to devote my life to books. Thusly I never went anywhere without some Wodehouse on my person and spent all my pocket money Bedford's two great second hand bookshops - the terrifying Wildman's (now defunct) and the very much still with us Eagle Bookshop. It was probably by now too late to do anything about it - I'd become a bibliomaniac, forever asking my parents to take me on detours during family holidays to do the local bookshops. Even though second hand bookshops in the UK seem to be a dying breed, I will always check Inprint at the very least to see if there's a second hand bookshop anywhere near wherever I'm visiting. I tell you - I can smell them out. Now I'm married to an American I have all the shops and wonders out *there* to discover as well!

Further to this, I'm also now a librarian (although looking to try and get the funding at some point to do a PhD in Cinema Studies/ Film History somewhere and get back into teaching in Higher Education) and so am forever stockpiling books deleted from the catalogue of wherever I'm working. I think its terminal. I don't think I can ever do without books. Even when my wife persuaded me to get rid of a box of them a few weeks back I exchanged them for credit and as such... got yet more books.

Ah well. Welcome to my world.

Sobre a minha bibliotecaFour years ago, when my wife and I moved into our first flat together, I was finally confronted by just how many books I'd amassed over twenty odd years of book buying. I've been buying books regularly since I was about ten and now I saw them all together (after a few years of storing many of them at my parents' house in Wales - they still have about half an attic full of my books still to follow at some far off stage when we can afford a bigger house) I realised just how many I'd actually got. Needless to say a year later we've now moved to a three storey house with one room on the top floor being my study/ library (worryingly the floor dips slightly) and most of the rest of the books being crammed in the front room. Amazingly there is now also room for things that aren't just books. Although my wife would add to that: only just.

The collection pretty much reflects my interests at different stages of my life. The only real area I've foresaken is my Doctor Who collection because I fell drastically out of love with the series when I was about fourteen and have never really fallen back in with it(which is sad in a way as collecting the Target books - that I've since all given away - was definitely my first book collecting mania). Otherwise, in one way or another a book buying obsession for one genre may give way to yet another at the drop of a hat - but I never really give up on any of them and will always snap up books on any of the subjects if they look tempting enough (or are cheap enough - librarians don't get particularly well paid I'm afraid).

As such, my teenage book buying tastes explain: humour books; books related to Punch magazine; books on music hall; books on British radio; books on British comedy; Sherlock Holmes books; Sherlockiana (by which I mean Doyle biographies, books on Holmes, parodies and pastiches); crime novels (which is probably the one genre I've always collected with a mania - basically if it's a Penguin green and white, it's British and I can afford it then I will buy it); classics (I very nearly did classical studies at university).

My late teenage book buying tastes explain: the books on music; the beginnings of my books on film; esoteric books and oddities.

My post university/ pre MA book buying tastes: all the books I felt I ought to read but never had as I'd always rather been tucked up with a copy of a book by H F Ellis than one by Emile Zola (basically all the Penguin classics).

My Cinema MA book buying tastes: oddly enough all the film books. I'm very proud of my cinema book collection, even though my bank account really suffered due to my desire to actually buy copies of ALL the books on my reading list. This is also when I started buying books on the English landscape (all the H V Morton type of stuff) as I used them for my dissertation.

Most recent book buying tastes: graphic novels/ sequential art (something I dipped into when young but fell out of love with but have now come back around to); ghost stories/ horror (mainly English).

Now: basically what I can find in Hebden Bridge's excellent antique and charity shops and from Todmorden's two wonderful bookshops - Lyalls and Border Bookshop. Todmorden even has a wonderful free book sharing system at the railway station. That plus the fact that as a librarian I can cream off the better books being deleted from wherever I'm working mean I'm ticking over really rather nicely at the moment, thank you very much...

AND NOW!... I'm making my own as well! Go to my blog or Lulu to see my occasional occasional, the Common Swings...