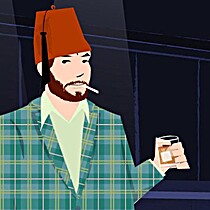 Sobre mimMatthew C. (Matt.) Murray earned his BFA in film, television and radio production from NYU, where he also studied the history of animation under noted scholar Jerry Beck. At the age of 30, Murray was elected president and was hired as the first executive director of the Museum of Comic and Cartoon Art where, among other projects, he curated an exhibit on the history and impact of Saturday morning cartoons and crafted events and programming such as the year-long retrospective about 1986: The Year That Changed Comics. He left MoCCA in June, 2008 and founded the Sequential Art Collective, an organization with the belief that comics, cartoons, illustration and animation are important art forms worthy of serious study and promotion. He is an avid collector of comic and animation art, and a recognized “Smurfologist.”

Sobre a minha bibliotecaIt's long, strong and down to get the friction on.