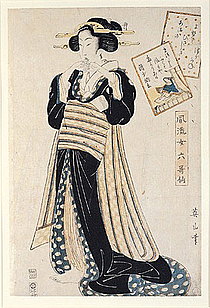 Sobre mimI work in a library, though I'm not a librarian.
The library I work in is in an art museum.
I'm a manga and anime fan.
I like art history.
I love shopping.
I'm a native New Yorker.
I'm a Francophile.
I'm a Japanophile.
I'm occasionally an Anglophile.
I read fantasy fiction, but not much sci-fi.
I have too many books.

2010 update: I own a Kindle. But I still buy paper books (hardcovers even!)

Sobre a minha bibliotecaThere's a lot of shoujo manga (Japanese comics created for girls) in my collection, but I do read some shounen, seinen, and josei. Quite a few of the manga titles in my library are in both English and Japanese and most of the Japanese titles were bought when there was little to no chance of them ever being released in English (which was not all that long ago...).

Many of the art-related books were purchased at the museum where I work (discount!). My primary interests are in art from 9th - 19th c Japan and art from 18th - 19th c France. I've also begun to appreciate early photography. I'll also pick up catalogs for exhibits that I liked or missed seeing.

As for the rest... I have my favorite authors & genres, but I'll pretty much read whatever sounds or looks interesting.