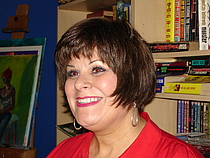 Sobre mimI am a high school history teacher in Sarasota, Florida, and an inveterate, voracious, almost omnivorous reader. During the school year I read one or two new books a week (new in the sense that I haven't read them previously), and average between four and seven new books a week during my summer break. My addiction to the written word dates back to third grade; and while I haven't yet gotten to the point of holding up convenience stores to support my habit, it is indicative that most of the used bookstores in the area know my face if not my name! Thank God for Goodwill -- great hardcovers for as low as $2.99. And I've already had to replace my library card, as it was practically worn through (not an easy feat since it's plastic!). But as much as I LOVE to read, I love to TALK about what I've read just as much -- and herein lies the problem. I have had enormous difficulty in finding kindred spirits in this area, both in the flesh and on-line. While many folks do indeed love to read, it seems darned few are either interested in or capable of engaging in a literate and articulate discussion about what they've read. I've joined both Shelfari (ugh!) and individual author e-groups, and have been frustrated beyond belief by the inability or unwillingness of most of my correspondents to engage in any kind of in-depth discussion about the books we have in common. So. . .dialogue definitely desired!

Sobre a minha bibliotecaMy library extends from childhood favorites (The Wind in the Willows, the Miss Bianca books, a few of Frances Hodgson Burnett's children's classics) to works on social history (my particular love). I enjoy classic sci-fi (Heinlein, Zelazny, the great Orson Scott Card, Doris Egan, Lois McMaster Bujold), fantasy (Marta Randall, Marion Zimmer Bradley, the inimitable Tolkien and JK Rowling's Harry Potter,and of course Terry Pratchett's Disc World delights)to mysteries and suspense thrillers. I enjoy dipping into an Edgar Wallace (no, I'm not that old, but I am an antiquarian in some ways)and own almost all of Rex Stout's Nero Wolfe oeuvre. I still adore Manning Coles (set pre and immediately post WWII), and once in a while indulge in a little masochistic Matt Helm (say what you will, Donald Hamilton was a hard-headed realist who could write darned well). I enjoy Harlan Coben, adore Lee Child, was an aficionado of both Dick Francis and Robert K. Tanenbaum's work until their writing style changed so drastically -- Francis b/c old age and then death prompted other, and far less gifted writers to insert their words under his name; Tanenbaum for what I can only assume were personal reasons after the loss of his partner; and even read a Regency romance or two (the EARLY Roberta Gellis's, Georgette Heyer, Sheila Bishop).

A few things to note about my library catalog. I'm still in the process of adding books, both those I own and those I've borrowed from the library. I have read almost every book on in my library list, even if I haven't always rated it. I do NOT own every book in my catalog, mostly because as a single mom and a high school teacher in southwest Florida, I hover between being poverty-stricken and barely making ends meet. So, since I am on a draconian budget (and have been for much of my adult life) I am an avid and frequent borrower from the public library system. I can't afford new books -- even paperback prices are usually beyond my budget. So I prowl through used book stores, and try to restrict my book acquisitions to those I know that I'll want to read, and reread.

I'm in the process of adding the tag "Borrowed" to my catalog to indicate that these are books I do not own.

Unlike many LTers, I have only a small pile of TBR books -- those few I have on hold through my local library system, or the few I've purchased b/c I know they'll make great additions to my classroom library. I'm thinking of emulating the few teachers I've met on LT who post lists of their classroom book collections and their professional reference shelves. (So many tags, so little time!)

I'm always looking for interesting books to tempt my students to read. I am close with a number of my students, and my room is always open to them at lunch (I haven't eaten in the teacher's lounge for almost the ten or eleven years I've been teaching), so I get to know what interests them.

And one other thing about my reading habits -- I am an avid reader, but that includes rereading old favorites. See ABOUT ME for more on that.