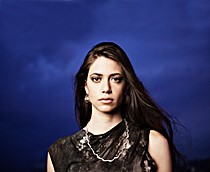 Sobre mimLillian Rodriguez is an actor based in NYC. She started her acting career in the theatre world. First working with the International WOW Company in the summer of 2009, she has since, acted in the LES Arts Festival at Theatre for the New City (Spring 2010), had her Fringe Festival debut in "Survival of the Fittest" (summer 2010), acted in the Estrogenius Festival at Manhattan Theatre Source (Fall 2010), "The Trojan Women" at Looking Glass Theatre, as "Helen of Troy" (January/ February 2011), and most recently she performed with "Galli Theatre Company", in "The Little Mermaid" as "The Sea Witch" + 5 other roles at "The Algonquin Seaport Theatre".

She loves acting in film, and her recent credits include a short Indy film, "Look Away", and a supporting role in the feature length indy "Hannah Has a Ho Phase". She also acted in "Men Die and They are Not Happy" which won the Tony Smith Award. The film was installed in an exhibition in January 2011 in the Haifa Museum of Art, moved to the ZOOM Contemporary Art Festival in Miami, and is soon to arrive in an exhibit in Brazil.

She is beginning filming on Film Annex's first web series "Red Notice", a modern adaption of "Dante's Inferno"! The character she is playing is inspired from the role of Virgil in "The Inferno".

She graduated with Honors from NYU, Tisch School of the Arts with a BFA in Theatre in December 2010. She received the "Outstanding Achievement in Studio Award" for her work at the Lee Strasberg Studio.

In addition to acting she loves writing, and recently head lined at Mikes Inspired Word, one of the most talked about Spoken Word Venues in NYC. She also had her first article published last month on the National Society of American Fight Directors site in their publication, "The Cutting Edge". Link to article here- http://www.safd.org/tce/07-2011/abuse-job

Sobre a minha bibliotecaThis Library is going to help me organize my mind. I need a list of sorts to keep track of all the books I have loved reading and would love to read.