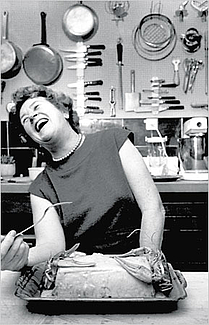 Television Personality. Legendary Television Chef. Born in Pasadena, California, and graduated from Smith College in 1934. Served with the Office of Strategic Services (OSS) in Washington DC, Ceylon (now Sri Lanka), and China during World War II. After the war accompanied her husband Paul Child to Paris where he was assigned with the American Embassy and started her culinary career, at the Cordon Bleu. With two French colleagues, Simone Beck and Louisette Bertholle, wrote "Mastering the Art of French Cooking," which appeared in 1961 which resulted in the PBS television series "The French Chef" and was followed by several other series including her "Master Chef" programs, where she hosted 26 of America's well-known chefs. Published over nine books including "The Way To Cook," "Cooking with Master Chefs" and "In Julia's Kitchen with Master Chefs." (bio by: Fred Beisser)