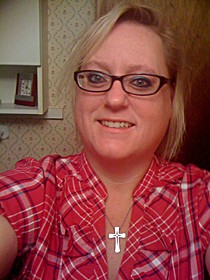 Sobre mimI'm a 40-year-old bookaholic, like almost everyone on here. I live in Oshawa, Ontario, Canada.

I'd like to think I collect books, but since I set them free when I am done you might say I'm more like a temporary hoarder. :)

Sobre a minha bibliotecaIt's such a mish-mash. What it really entails is bits from my Mum (cast-offs and things I may never read), books from friends, but lots of my particular interests. All the thrillers, mysteries and horror were definately bought for me and usually by me. Some of the paranormal and romance are mine as well, as I do like to dabble in almost anything.

Growing up, my brother's friends used to think I was morbid because of the books I read. But I could never quite figure out why it was okay for boys to read lots of horror books, but it was wrong for girls too? Then again, I've never been the one who followed the herd.

There are times when I sit in front of all the unread books and think I have nothing to read. Nothing tickles my fancy, which probably explains why I have a mixture of non-fiction, true crime, horror, cozy mysteries, yucky romances (just don't tell anyone, it may ruin my image!) and heavy duty thrillers. I can never tell what kind of trashy reading I'll be caught up in. I'm usually willing to give anything a try, but I have a really hard time with sci-fi/fantasy. I think I need to be able to believe the story could be real, and since I don't believe in aliens and monsters, they can be a little hard to take.

Lendo atualmenteCrime Scene: Inside the World of the Real CSIs de Connie Fletcher