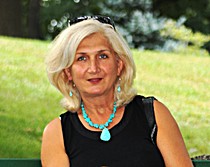 Bianca Lakoseljac holds a BA and MA in English literature from York University, and is the recipient of the Matthew Ahern Memorial Award in Literature. Bianca taught communication courses at Ryerson University and Humber College.

She is past president and special project chair of the Canadian Authors Association (CAA) Toronto Branch; a board member of The League of Canadian Poets; Huronia Foundation for the Arts; Book and Periodical Council; a member of The Writers Union of Canada; among others.

Summer of the Dancing Bear, a novel that explores the “rite of passage” of a fourteen year old girl befriended by a Gypsy clan, was published by Guernica Editions in June 2012. The novel is set in the countryside near Belgrade, where Bianca spent her childhood.

Bridge in the Rain, a collection of stories linked by an inscription on a bench in Toronto's High Park, was published in Fall, 2010, by Guernica Editions in Toronto.

Memoirs of a Praying Mantis, a collection of poetry exploring environmental issues and legends of High Park, was published in 2009 by Turtle Moons Press in Ottawa.

Flower Power, a historical novel inspired by the 1967 Art Symposium in High Park and Mark DiSuvero’s sculpture after which the novel takes its title, is her work in progress.

Her short stories and poems have been published in journals and anthologies such as: Canadian Woman Studies, Inanna Publications and Education, York University; Canadian Voices, BookLand Press;Verse Afire, 2007-2010 by The Ontario Poetry Society, among others.

Bianca does readings on a regular basis at writers’ festivals, libraries, and bookstores. biancalakoseljac@rogers.com

SYNOPSIS: Bridge in the Rain is a collection of stories set in present day Toronto and linked by an inscription on a bench in High Park. The stories chronicle the travails of seven women who are dealing with turning points in their lives, be it resolving family crises, making a career choice, illuminating a secret behind a local legend, or finding an inspiration for their artistic endeavours. The stories link contemporary women’s issues with concepts from history and art—from Vincent van Gogh to Emily Carr, to James MacDonald and the Group of Seven, to Norval Morrisseau, to the early impressionists. The book has received consistently excellent reviews; one example is a five-star review from the Library Thing blog http://www.librarything.com/work/10696822/68708411

Elizabeth Abbott, finalist for 2010 GG Award, wrote:
"Bianca’s writing, precise and elegant, is shot through with the element of surprise as she gently but firmly pushes the boundaries between reality and the supernatural. In this delightful collection, Bianca Lakoseljac has found her literary voice in the ordinariness of lives touched and transformed by magic.”