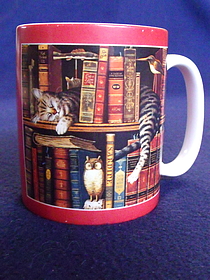 Sobre mimBrief whys and wherefores of the favourite writers starred in the cloud: the first poem of William Barnes I ever read struck such an emotional chord I cried: The Voices That Be Gone.
My mother was from Gloucestershire and a near contemporary of Laurie Lee whose As I Walked Out I read as an impressionable teen-ager.
Alan Bennett, mmm, must be his Yorkshire accent.

Sobre a minha bibliotecaAn odd collection of books acquired over the past forty years or so. Despite occasional culls they still number more than 1,800 excluding all the books my wife has collected.

I don't know if it is statistically true but the book which most often crops up as shared in others' libraries is Mark Haddon's [The Curious Incident of the Dog in the Night-time.] Or perhaps I'm just looking for it and notice.

A note on Interesting Libraries: whilst it is comforting to find libraries comprising a list of very similar authors and works as one's own, I'm looking for libraries with not one similarity. I exclude all the fantasy/sci-fi and similar libraries of narrow interest acknowledging that my own small collection is full of blind spots, lacuna, silent holes a bit like Gruyere cheese.

A note on Granta: the fortunes of Granta, a student run magazine, were revived when Bill Buford, an American, became editor in 1979. The first six numbers of the journal appeared between 1979 and 1983 and were reprinted as a boxed set in September 1989. Penguin distributed the quarterly journal beginning with Granta 7 (1983). In 1985 Granta began distribution in the USA with Granta 15: The Fall of Saigon. Penguin Books relationship with Granta ceased with issue 65, Spring 1999.