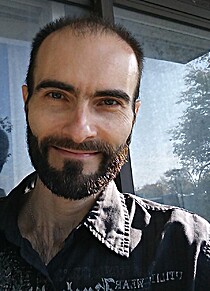 Sobre mimAlan Draven was born the same year Canadian slasher film “Black Christmas” hit theatres. He lives in Montreal, Canada. His stories have been published online, in magazines, and anthologies. His first novel, Bitternest, was published in 2007. In 2008, he edited the gothic anthology Sinister Landscapes which went on to become a number one Amazon bestseller. In 2009, the novella collection Creeping Shadows was published featuring his novella “Vengeance is Mine.” In 2010, his short story and novella collection The Bitternest Chronicles was published. His screenplay for his short story “Breaking and Entering” was adapted into a short film in 2010 and released in 2011. Fractured Time, his second novel, was published in 2011 by Black Bed Sheet Books. His second short story/novella collection, Spooky Showcase, was published in 2012 by Pixie Dust Press. His third novel, Nocturnal Offerings, will be published by Black Bed Sheet Books in the fall of 2013. His books can be found everywhere online. He can be reached 24 hours a day on his Facebook fan page at facebook.com/bitternest and via his blog at http://bitternest.blogspot.com