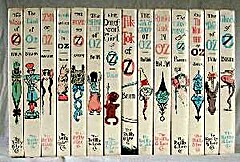 The Wonderful Wizard of Oz by L.Frank Baum is America's greatest fairy tale, and Oz is its best-loved fairyland. Oz has flourished for over a century in a long series of books and numerous stage and films adaptations.

L. Frank Baum discovered Oz in 1900, when The Wonderful Wizard of Oz, illustrated by W. W. Denslow, was first published. Baum was born in 1856 at Chittenango, New York, where his father had made a fortune out of oil. Young Frank was a stage author, manager, and actor before his marriage. Then he sold axle grease, managed a newspaper and variety store in South Dakota, and traveled for a crockery firm before he became successful as a children's author.

In The Wizard of Oz, he created an American fairyland with a Scarecrow, Tin Woodman, Cowardly Lion - and a strong heroine, Dorothy Gale of Kansas, in whom his child readers recognized themselves. In 1904, the Oz story continued with The Marvelous Land of Oz and then four additional Oz books until Baum tried to end the series in 1910 with The Emerald City of Oz by cutting off contact between Oz and the real world. But contact was reestablished in 1913, and thereafter, a new Oz book by L. Frank Baum appeared each year through 1920.

L. Frank Baum died in 1919 at his home in Hollywood, California. The story of Oz did not end with Baum's death. Baum's publishers contracted with Ruth Plumly Thompson to continue the series, and a new Thompson Oz book appeared every year from 1921 through 1939. Then John R. Neill, who had illustrated all the Oz books but The Wizard of Oz itself, added three books to the series. Later volumes appeared at intervals through 1963, when the fortieth Oz book was published. Today, hundreds of Oz stories continue to be written by a new generation of authors and fans.

The Oz story has been told countless times on stage and screen, stretching back to the earliest days of silents. In 1903, The Wizard of Oz became the most successful Broadway play till that time; in 1910, it became a one reel silent movie; and in 1914, Baum's own Oz Film Manufacturing Company produced several feature length Oz silent movies. Metro Goldwyn Mayer's 1939 triumph, "The Wizard of Oz", starring Judy Garland, is one of the most beloved films ever produced. The Broadway musical "Wicked" has introduced new elements to the Oz story.

Founded in 1957, The International Wizard of Oz Club is merely one sign - but a substantial one - of the incalculable influence Oz has had on the American imagination. The Club produces a tri-annual periodical "The Baum Bugle", hosts several annual conventions across the country, and is active in publishing original Oz books as well as significant reprints of books by Baum and Thompson.