Institute for the American Founding 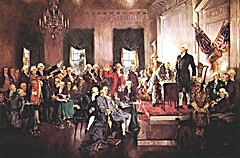 A group for anyone interested in the roots, principles, men, and any other topics related to the American Founding. I define that as from 1763 (end of the French and Indian War) to 1799 (G. Washington's death). This would include the War of Independence, Constitutional Convention, and the Federal period. This group is for those who have a deep respect for the principles on which America was founded and an admiration for the men called the Founders and Framers.
There seems to be a growing popular interest in this period perhaps because many feel that the country has drifted since the ascendancy of the Progressives through the Depression. A feeling of drifting seems to indicate that there is something to be drifted away from. The greatest domestic threat to the Founding of course was the Civil War in which Southerners fought to establish a society in opposition to the Founding (the Confederacy as the Anti-Founding?). The United States of course fought to preserve the Union which is the minimum structure established at the Founding.
In our group, perhaps we could share the book that began your interest in this period, some websites or your favorite quote by a Founder or insights from books that you have found.
On the darker side, we could discuss various threats (the antithesis of the Founding) and current applications.
This group is based on the premise that the American Founding was a remarkable period in the history of the world and the principles discovered are very much applicable to us today.
Perhaps the greatest question today is: was the American Founding the result of a unique historical sequence, never to be repeated or are there principles that are universal able to be transplanted to other cultures in order to change the world.